I was privileged to spend a week in Glasgow as part of the COP26 conference, a rather unforgettable experience.  I shared a series of reflections on Facebook, and thought I’d collate them all into an article here because Gateway is deeply committed to providing a theological perspective on our role in this world (God’s creation) and on the climate crisis impacting it today.

I was at COP26 in partnership with the CCOP (Christian Climate Observers Program), a group of mainly young, very passionate Christian climate activists from all over the world – Philippines, Zimbabwe, Argentina… These were an incredible group of people, I can’t begin to describe.

On the first day, one of them organised a private meeting with Al Gore (former US Vice President, but more importantly Oscar winner for the climate documentary An Inconvenient Truth and Nobel Peace Prize winner for ‘informing the world of the dangers of climate change’). He certainly knows his business!  His daughter Karenna also joined us, she runs the Centre for Earth Ethics out of Union Seminary, NY.

We had a fascinating conversation, but what struck me as most remarkable was that Gore, as a former politician, framed the climate crisis as a ‘moral, ethical and spiritual issue’. One rarely hears climate change described as a spiritual issue – especially by a politician! My ears pricked up. He said,

‘We are destroying God’s intricate, balanced, life-giving creation – we know it’s wrong, we have a choice, and yet we continue.’

So why have Christians and the church been so slow to see this? And is there really a connection between climate crisis and the gospel?  There are some great answers to that question…

Continuing my reflections… On the opening day of the conference, the queue into the ‘Blue Zone’ was 90 minutes, and I wandered about to get the lay of the land. Amidst the crowds, noise, and confusion were various demonstrations and protests… a group of flag-waving Ugandans protesting the tyranny and corruption of their government; a vigil of activists camped under a bridge promoting justice for refugees; a march of 450 Tamils demanding liberation from state terrorism in Sri Lanka; and my favourite? A lone Scotsman in a kilt standing on a wall with a loudspeaker denouncing the British imperial overloads (with background music from Empire Strikes Back).

It might seem that all these groups were simply using the occasion of COP26 to get their causes into the limelight. But there was a constant awareness that the climate crisis is not just about climate – it’s about justice. Justice for the poor, the oppressed, and the devastating extinction of our fellow creatures.‘Climate justice’ was the outcry heard daily in every forum, march and protest. The ‘crime’ of the wealthy and powerful destroying, exploiting and polluting the earth for selfish gain (perhaps in ignorance decades ago, but with full knowledge today). Indigenous peoples, developing nations, oppressed minorities… those already experiencing the harshest realities of poverty and inequality with no opportunities to escape, are right now bearing the worst effects of climate catastrophes – floods, drought, rising seas, etc. We have safety nets – but these are the people already living on the edge.

And it’s these very same governments and corporations, the wealthy, powerful, or corrupt, whose selfish refusal to implement the tough decisions to mitigate the worst effects of climate change (in order to preserve their own interests), condemning the rest of the world to death. Agree or disagree, this was the cry for climate justice. If our God is a God of justice whose heart is for the poor, surely this lies at the heart of the gospel?

For the many thousands of people who were not part of the ‘in group’ of international decision-makers, the biggest day of the conference was Saturday’s march through Glasgow. People marched for all sorts of reasons – to highlight the crisis, stand in solidarity with the earth and all its inhabitants, appeal for ‘climate justice’, protest corporate greed, bring down the system, or simply to ‘save the planet.’

For many from distant and troubled locations, it was a rare opportunity to see and be seen, make their voices heard. Cameras and journalists were everywhere. And what an experience it was! 100,000 people gathered together to push ahead (literally and metaphorically) for immediate, drastic, and monumental change in the face of an existential crisis unlike any humanity has seen before.

So what was I doing in this crazy mix? Why was I even there – as a theologian? Let’s be clear. This is not ‘our planet’ – it is God’s earth. As Ps 24 reminds us, ‘the earth is the Lord’s, and everything in it.’ But yes, God gave it to us! Why? To rule over the earth – as his ‘image bearers’, his emissaries to a creation of limitless potential. We were given this incredible commission and opportunity – yet instead of ruling in God’s image with love, care, and self-sacrifice (think Christ as our premier human example), we have ruled with ever-increasing greed, selfishness, exploitation and pollution – with little or no regard for our fellow creatures, or those more destitute. And now we’re seeing the consequences. We are the problem – and the Church is no less to blame than anyone else. Yet God has commissioned us to be the solution – and that is the theological dilemma that brought me to Glasgow.

Was COP26 a failure?

My penultimate reflection… if COP26 was seen (mainly) as a failure of world leaders to do anything like enough, where do we find hope? Is it time to throw in our chips and cash out, give up on the earth and apologise to the next generation for our failings? After all, despite some excellent ‘final hour’ negotiations and agreements, the outcome is still projected to be far too little too late to limit global warming to a 1.5o rise. In fact, even with all the new measures and future targets, we’re on a trajectory for 2.4-2.7o, where every fraction of a degree will see dramatic increases in the scale and scope of climate disruptions and catastrophic events.

So, where’s the hope? Greta gave up on COP26 before it began, with her ‘blah, blah, blah’ statement. Fair enough. But she and the Scottish Youth organisations nevertheless organised a 10,000 strong ‘Fridays for the Future’ march – completely separate from the big march planned for Saturday! The point being, young people are taking matters into their own hands. They’re no longer waiting for ‘a seat at the table’. Not only young people, but small countries, faith groups, NGOs, businesses – those not party to the power structures and UN decisions – are saying ‘fine – you’re not doing what’s needed, we’ll do it without you.’

There’s an aspect of defiant hope there, which is inspirational.But it’s important to point out (as a theologian), that our Christian hope is different. Our hope is rooted in a loving and faithful God who has created this world for a purpose and will not abandon it – nor will he abandon us! That does not mean we sit back and wait for God to miraculously save the planet because we’ve mucked it up beyond repair. It means ‘hope’ is a discipline – not wishful thinking that world leaders will do the right thing. One Orthodox leader said ‘hope is a duty, not a luxury’. Paul wrote, ‘suffering produces perseverance; perseverance, character; character, hope.’ I’ve never understood that sequence until now. Hope is putting our faith into action. And persevering no matter what.

God works through his people not instead of his people. (It’s our mess, and we have to clean it up). So where were God’s people at COP26? They were everywhere! The number of faith groups involved in the march alone was inspiring – large internationals like Tearfund, Christian Action, Lausanne and a Rocha – but dozens of smaller groups – with an extraordinary number of young activists like the Young Christian Climate Network. But it wasn’t just protest marches. Churches all over Glasgow were hosting events, prayer vigils, campaigns of awareness – and on and on… this is where our true hope can be found – God with us.

As the COP26 conference wound down, I began to think of the ‘what next’ question. Many of the CCOP group were already deeply engaged in climate change activism; even during the conference they were circulating news items, arranging interviews and radio spots, writing op-eds for their networks back home – but I don’t have such networks. Or do I? The church is the largest social network in the world, and I’m a theologian at a climate change conference! Surely, I must be responsible to convey a message about what I’d seen and heard in Glasgow – just as the disciples were responsible to convey all they’d seen and heard from their time with Jesus.

One of our discussions centred around the two sides of being a ‘witness’; one is seeing and observing – the other is ‘bearing witness’, testifying to what you’ve seen and heard. The first is easy, just keep quiet. But when you stand up and speak out as a witness, then you become vulnerable to attack, public scrutiny, even danger – whether from the Roman empire, the mafia, or the governments and corporations of today – anyone whose interests are threatened by your testimony. No wonder the biblical word for witness is ‘martyr’. I was struck that in light of my years of privileged academic, scientific and theological study, I have taught a great deal, but have rarely taken a public stand to ‘bear witness’. I knew the answer to ‘what next’ is ‘I can do more’. So here we are.

I’ve done a radio interview, a Diocesan website article, set up a podcast, written a blog, this little series of FB posts – and am designing a new course around ‘Christians, Climate and Creation’. Okay, small scale stuff, but it’s a start. And if the message is right, it will spread… as Jesus’ disciples learned.

Exactly two weeks ago at this moment, I was scrambling to get the final touches ready for the GTS 5-Year Anniversary Celebration.  If you were… 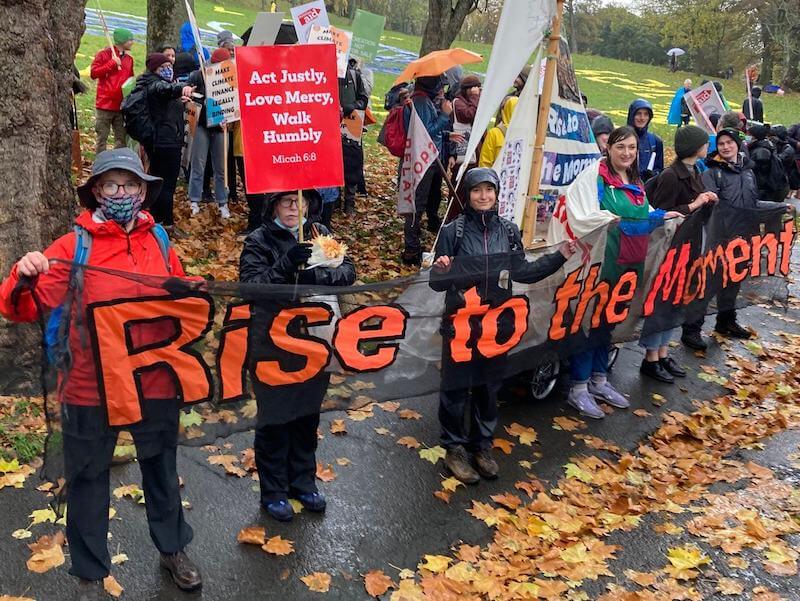 If COP27 passed you by unnoticed, you’re not alone.  Last year one could hardly escape the tremendous build-up and media noise around COP26 in Glasgow,…